We don’t know about you, but when we think about Boston – and iconic foods of Boston – the first things we think of are Boston baked beans, New England clam chowder and lobster.

Here’s what’s in it:

And – of course, to finish up the Boston food experience – some nice warm apple crisp with vanilla ice cream for dessert!

Boston baked beans are made from navy beans, usually stewed (we know – they’re called ‘baked’, but really, they’re stewed). They use a sauce made from pork and molasses. Boston baked beans were so popular in Boston that, we often refer to our fair city as “Beantown.” In other parts of New England, baked beans are often sweetened with maple syrup. In Colonial New England, baked beans were cooked on Saturdays and then left in their brick ovens overnight so that people could eat a hot meal on Sundays without cooking that day.

The History of Clam Chowder: A New England Tradition

A New England clam chowder, made as it should be, is a dish to preach about, to chant praises and sing hymns and burn incense before. To fight for. The Battle of Bunker Hill was fought for–or on–clam chowder; part of it at least, I am sure it was. It is as American as the Stars and Stripes, as patriotic as the national Anthem. It is ‘Yankee Doodle in a kettle.’

We don’t know who Joseph C. Lincoln was, but we sure do agree with his assessment of New England Clam Chowder.  We are happy to say that our own chowder has received highest of praises from even the choosiest New Englanders.

We have a number of other Full-Service Catering Menus available for you to review. Please be sure to give our event planners a call to discuss your own menu preferences.

Contact us or request a quote today to learn more about our wide range of menu options and services. 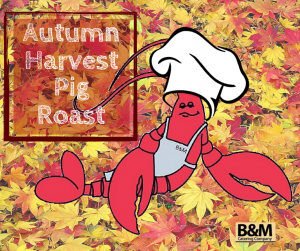 We Prepare – We Deliver – You Enjoy