Here’s what Dan R. of Simsbury, CT had to say on Yelp about his clambake.

They were absolutely stellar in every way!

Food, service, everything was excellent.

The food was amazing!!

The clam chowder had a lot of flavors and wasn’t overloaded with potatoes, and yes, there were clams in the chowder. The steamed mussels and clams were also great super fresh and super delicious. I passed on the beans and the potatoes, but let me tell you that the corn I had was great – a super large portion that was expertly cooked and tasted sweet and excellent.

The lobster was so good- perfectly cooked and without any of the tough stringiness, you get from a lobster that’s been boiling in the pot a teensy bit too long.

One of the B&M guys pre-cracked the tail and claws to make your dining experience easier.

Now I didn’t expect to rave about the BBQ chicken at a clambake, but let me tell you the chicken was outstanding. So moist and tender with a really good barbecue sauce on top.

And we finished off our feast with a scoop of apple crisp and a squirt of whipped cream.

Thank you, Brian and Mickey Doherty (The B&M in B&M).
You did a bang-up job for us.” 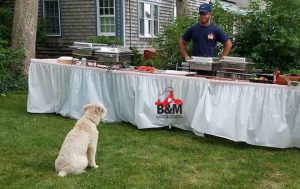 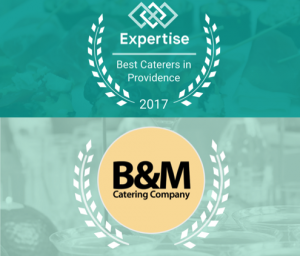 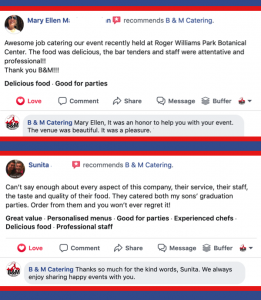